It was the end of the spring semester, where we found a discouraged student leader wondering where his organization went wrong:

“I just don’t get it. I mean I told the team it was our goal to place in the top 3 at the International CollegiateA Capella Championships. I even made sure we practiced as hard as we could to get there. Yet we didn’t even make it in the top 10. I thought it was important to set goals and work towards them.” 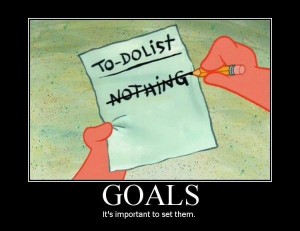 While this student leader was correct in thinking that goals are important to set and work towards, he missed something that would have made his organization not only successful, but also a community where everyone feels welcome, connected, and engaged. He only made a goal; not a S.M.A.R.T. goal.

Our student leader from earlier fell short because he had simply made it the goal of the team to get at least third place. He never went in to the specifics of how the team would accomplish the goal. Furthermore, he never talked with the rest of the team about what the goal should be in the first place. He should’ve gotten everyone on the team to agree that they were fully capable of reaching at least third place within 4 months of practice. He could have had a plan, such as adding an extra half hour of group practice along with an extra half hour of solo practice for each team member. In the end, the team would’ve been more likely to succeed, because they made a S.M.A.R.T. goal.

Why are SMART goals important to a team?

The biggest reason is that SMART goals are agreed upon. When each team member aligns their vision of success with the team, everyone will be working towards the same goal. Once everyone starts working towards that same goal, you will find that your team is playing to win; each team member is maximizing their resources to finish what he or she started.

New members will feel welcomed onto the team because they will know that their visions of success are valued. Everyone will feel connected on the team because they are all working together to accomplish the same dream. Lastly, the team will become engaged if they are all held accountable for the details that go into the team’s vision of success. S.M.A.R.T. goals are a catalyst for pulling the 1s and 2s to the center of the dance floor within your organization.

So this upcoming semester when you have your first meeting with your organization, be sure to use S.M.A.R.T. goals as a tool for increasing engagement among team members.

About the Author
Swift Kick helps Student Affairs Professionals discouraged with the lack of student involvement on their campus to build a culture where every student feels welcomed, connected and engaged. Learn more at > SwiftKickHQ.com
Social Share