(Before reading this post, if you want to know more about why I went to this conference and who sent me there, check out my previous SXSW post.)

There is nothing I can write that will ever describe what I experienced at South by Southwest Interactive (SXSWi) in Austin, TX last week. Many of you have tweeted, emailed, etc. and asked what the experience was like so I hope this helps paint a clear picture of my time in south.

Build Up / Arrival to Austin

Leading up to last weekend, I spent some time reading the blogosphere for advice and an overall sense on what to expect.  This was the first time I would be at a conference outside of Higher Education and I was traveling by myself as well.  To help quell some nerves, I attended a “Boston in Austin” meetup to get to know some of the people who were headed down and to get their sense of what SXSW was all about. Everyone there was so gracious and nice, it gave me a glimpse of what was to come.

Arriving in Austin was a breeze. I was a little concerned because when your event has over 20,000 delegates, you might expect some hiccups, but not at SXSW! I got to my hotel, checked-in there, and was able to register at the Austin Convention Center and get my coveted SXSW badge without any problems.  Now, as many of you who have been to Higher Education conferences know, you typically will take your badge off at the end of the day before going out, but not there! At SXSW, it is common to wear your badge EVERYWHERE at night since it gets you into many of the bars, restaurants, and clubs hosting SXSW related events.  I put the badge on and began my SXSW adventure.

I realized quickly why people paid the money to be here every year: power networking.  Deep down, I just couldn’t believe that everyone was going to be as nice to me as the folks in Boston were… but they were. Every single person I met was unbelievably nice, willing to chat, help, and be a connector.  It made perfect sense… you just never knew who you were talking to so you always had to have your best foot forward.  Everyone I talked to had an interest in Higher Education and were willing to listen, lend ideas, and connect me with those that could help and amplify our stories.  Where else could I have had one on one conversations with Meredith Artley, Managing Editor of CNN.com; Baratunde Thurston, Director of Digital at TheOnion.com; Pete Cashmore, CEO of Mashable.com; and Sean Ammirati, Chief Operating Officer of Read Write Web.  Oh, and for fun, I got to hang out with Romany Malco, and be in the same spaces with other stars like Rainn Wilson, Dane Cook, and Conan O’Brian just to name a few!

I also connected with some fantastic folks who work in Higher Education at an “EDU” meetup, at educational sessions, and at night while out and about.  Key folks I met were Cynde Fleagle from Penn State University; Sue Beckingham from the UK ; Ellie Lovell from University of Warwick, UK; Lori Packer from the University of Rochester; and John Hill and Leigh Graves Wolf from Michigan State University.  All were extremely insightful and gave me key insights that will help move some of my technology ideas forward in Student Affairs.

Of course, getting the Student Affairs community together at SXSW was amazing.  Meeting folks in person for the first time like Marlena Ballard, Pete Pereira, Lynne Ellison, Laura Lambeth, Laura Pasquini, Julie Larsen, and Brad Popiolek was not only fantastic, but also would have made Tom Krieglstein and Debra Sanborn proud knowing what they created in the Student Affairs Collective still growing strong at events outside of higher education!

Finally, spending some serious time with Rey Junco and Liz Gross was a major highlight. We shared perspectives on many things in Higher Education, technology, etc. I was inspired to hear about Liz’s research interests and know she has a great mentor in Rey as she goes through her doctoral journey.  It was a real treat to see Rey impress A LOT of people while he presented his research and findings. His work is instrumental in my work as a Higher Education administrator and practitioner.  As we continue to see shifts in communication with our students at the University level, we all need to be tuned in to Rey’s work.  If you haven’t read his stuff yet, you really should.

– “No Child Left Behind – Mobile Tech Meets Education”
– “The Potential For Augmented Reality for Education”
– “Offline America, Why We Have A Digital Divide”
– “Demystifying Online Privacy and Empowering the Digital Self”
– “Using Twitter to Improve Student Engagement”
– “Tech Power to the People: Digital Community Engagement”
– “Measuring Social Media – Let’s Get Serious”
– “The Science of Influence”
– “The Art of Enchantment”
–  ”Method Tweeting (for Non-Profits and other Players)”
–  ”Online Reputation, in and around Contexts”

Finally, one of the coolest things I saw as part of the educational process was the staff from Ogilvy and other conference attendees who created beautiful “notes”, by way of creative images, of many of the talks given.  Here is just one amazing example from the session: “Tweeting on Weekends: Are we becoming socially anti-social?”: 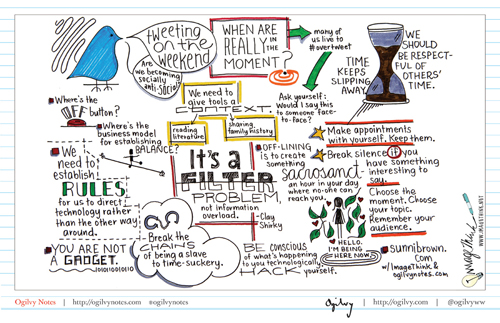 Imagine having some of our association talks presented to us in this timeless format?  Unbelievably stunning, creative and thought-provoking, even if you weren’t in the session.  To view more of these amazing images, visit http://ogilvynotes.com/ and prepare to be astonished.  The RSA Organization in the UK does this also and has some YouTube clips out there as well.

Services To Know About (again, with a future post going through in more detail what I think about all of these!)
Leximancer – (Mentioned during Rey Junco’s talk, it is a tweet content analyzer!)
Radian 6, ViralHeat, Swix (Paid Social Media Analytics Services)
SlideRocket (Awesome presentation software. Closest thing to Keynote that I’ve seen online!)
TechSmith Corporation (makers of Jing and Camtasia) (Fantastic screen capture software)
Min.us (A sharing aggregator that I really liked and will start using)
Animoto (While I’ve been using them for a while, they are a great/easy way to make short films using current photos and video clips!)

Gadgets
If you are into gadgets like me, the only things that caught my eye were the iPad 2 and the Asus EEE Slate. If you already have the iPad, I don’t think it is worth upgrading, unless you have a need for video chatting regularly.  Yes, its thinner, slightly faster, and extremely light, however, it is not yet worth upgrading.  If you don’t have an iPad yet, and want one for casual productivity, then go for it!

As for the Asus EEE Slate, take a look at my quick video review:

Wrap Up
Overall, it was one of the best professional / personal development opportunities I have had in recent memory.  It is a no-brainer why due to my passion and interest in technology and since Higher Education conferences aren’t known for their innovative education in this area, I was able to go to a place where I was not the one teaching, but learning.  In hindsight, the best thing I did was travel by myself to experience as much as I could, but still have familiar faces like Rey and Liz to share in the experience with me.  The pictures, videos, and tweets just don’t do it justice!

If you have the same passion and interest in technology that I have, I invite you to join me next year (assuming that it isn’t the same time as the ACUI 2012 Conference in Boston) at SXSW Interactive 2012!

You have to see it to believe it!

What questions do you have about my South by Southwest Interactive experiences? If you went to SXSW this year, was your experience as good as mine?